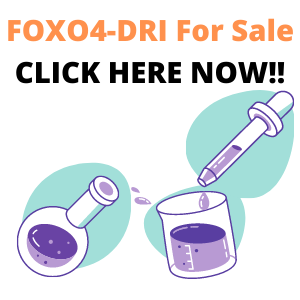 For those in the research industry searching for the peptide FOXO4-DRI For Sale, let us help. USA Peptides has over 120 research products in-store. We work alongside the established research company Peptide Sciences to guarantee you the best research chemicals online. You will find a wide selection of amino acids, peptides, and proteins for all of your research needs including FOXO4-DRI for sale 10mg (Proxofim) for $300.

Also in this post, we look at what effects the FOXO4-DRI dosage has had so far in studies…

FOXO4-DRI is a molecule developed by scientists at the Erasmus University of Rotterdam (Holland). It showed signs to reverse several signs of aging in mice. After three injections, the results were the elderly rodents’ fur grew back, their kidneys functioned better, and they regained physical vigor.

As published this week in the journal Cell, researchers have designed a molecule that causes cells damaged by aging to commit suicide. It can help in reducing inflammation in tissues and improving their function. FOXO4-DRI “is effective in vivo and therefore, in theory. It is also applicable against aging in humans,” explains Peter de Keizer, research director.

Over the years, cells accumulate damage to their DNA that affects their activity. When injuries are irreparable, they may choose to commit suicide so as not to put their environment at risk.

But the opposite can also happen. If cells continue to live despite the damage, they become senescent. Their aberrant behavior causes the tissues to swell. According to de Keizer and his group, this is one of the main causes of the deterioration that the years inflict on the body.

When DNA gets damaged with age, what tells a cell that its time has come is a protein called P53. P53 watches that everything is in order. If something fails, it triggers a cascade of reactions that culminates in apoptosis and cell death. This is why this guardian also plays a key role in preventing cancer. The researchers found that in senescent cells another protein, FOXO4 peptide, binds to p53 and blocks its function. This prevents apoptosis from occurring.
As time passes, more senescent cells accumulate in the tissues that interfere with the function.

Accelerated aging mice used by researchers – The one on the left received the FOXO4-DRI injections from Keizer et al / Cell Press. Sensing that this interaction was key to aging, de Keizer’s team reproduced the small fragment of FOXO4 that binds to p53. This piece of protein, or peptide, is FOXO4-DRI. It competes with natural FOXO4 in cells for binding to p53. But, since modified, it binds better to p53 than its competitor. Thus, the protein is free to carry out its function: to end the life of senescent cells.

The effects of treatment

The scientists tested their hypotheses first in cells, and then in two types of mice. Some that age rapidly and others that age naturally. In mice that aged prematurely, three injections of FOXO4-DRI over the course of a week had a drastic impact. Ten days after treatment, their lost fur began to grow back. At three weeks, their fitness improved as they spent more time running on the wheels of their cages. And a month after the injections, the markers indicated that his kidneys were working better. Naturally, aged mice also experienced the same effects from FOXO4-DRI treatment, although less abruptly.

Researchers are now exploring the possibility of translating the advance to humans. “The main obstacle before doing so is that this peptide kills cells bad cells, but cells at the end of the day ”, acknowledges de Keizer. Mice treated with FOXO4-DRI for a year have shown no side effects. The molecule must first pass strict toxicity tests, reports the researcher. Scientists continue to explore the possibility of transferring the advance to humans

Testing the drug for the first time in healthy people is not feasible as yet. The group plans to test it in patients with glioblastoma, a deadly type of brain tumor with very limited therapeutic options. FOXO4-DRI has shown to be very effective against this cancer. It is because it encourages damaged and aberrant cells, such as tumor cells, to commit suicide.

“Once we know that this peptide is relatively safe in humans. We will not hesitate to make every effort to try to treat patients suffering from diseases related to aging,” emphasizes de Keizer. According to a statement released by Cell, the researcher plans to found a company to develop the therapy if it passes safety tests.

For Carlos López-Otín, a specialist researcher on aging at the University of Oviedo, with de Keizer’s work, in which he has not participated, states “a new opportunity opens to explore the value of this peptide for possible interventions aimed at extending the human longevity! ”

<<FOXO4-DRI For Sale NOW for Research and Development only>>