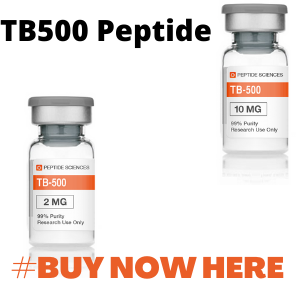 TB-500, also commonly known as Thymosin Beta 4 and is a naturally occurring peptide produced in the body. It is mainly used in racehorses to prevent the formation of adhesions (abnormal fusion of membrane surfaces due to injury or inflammation). Although it is not considered a veterinary medicine thymosin beta 4 dosage use is by injection. It is a research peptide and not for humans, and only used by those who like to experiment. Please note that the World Anti-Doping Agency bans the TB-500. This peptide has benefits identical to those of growth hormone and includes:

As you may know, peptides are two or more amino acids linked together in a chain, and TB-500 is a short peptide fragment of the hormone Thymosin Beta 4. In other words, they are not quite the same (TB-500 is only part of the whole hormone), although often, both names are used interchangeably. Thymosin Beta 4 is much harder to find. At the same time, the easier production and lower cost of TB-500 and the fact that its action is almost similar to that of the hormone make it significantly more popular to use and easy to detect.

The most useful function of TB500 is its ability to increase the number of receptors on the surface of cell-building proteins, such as the actin protein. In combination with myosin, this protein forms the contracting (shrinking) fibers of muscle cells and affects the movement and metabolism of many other cell types. The more significant number of actin receptors allows accelerating healing, cell growth, and cell proliferation. Thus it builds new pathways for blood vessels and stimulates beneficial inflammations that help wounds heal faster.

Due to its molecular structure and low molecular weight, the TB-500 is exceptionally mobile and can travel long distances through various tissues. Therefore, it can circulate throughout the body, searching for damaged areas, healing them, and accelerating cell growth in them. Additional benefits of its use include increased flexibility, reduction of tendon inflammation, germination of hair loss, and darkening of gray hair. Studies are also currently underway to determine whether TB-500 can treat damaged heart tissue, particularly a condition known as ventricular hypertrophy.

Accelerated healing of superficial wounds, leaving no scars (or leaving minimal) and almost no discomfort

Trial use with TB-500 is injected and provides low-healing wounds and heal quickly or chronic injuries that do not show a recovery process.

Side effects and risks

There are conflicting results regarding the link between cancer and TB-500. According to some, TB-500 promotes the growth of cancer cells, while according to others, it is the opposite, and it can slow down their formation. In studies of cancer patients, doctors have noticed that the affected tissue has a higher concentration of Thymosin than healthy people. It led them to conclude that he was partly responsible for the disease. After further research, it became clear that its leading role is to produce white blood cells. Therefore its presence in these infected areas does not seem to be responsible for their occurrence, but to be able to identify them and help the body fight them.

All peptides sold are for research only. Long-term studies on the effects of TB-500 on humans are almost non-existent (although there are many animal studies). According to information coming directly from its users, taking it can cause a temporary feeling of lethargy or euphoria.