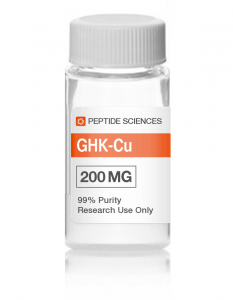 This copper peptides review gives you the low down on these interesting research chemicals, so do want to know more then read on… Everyone is talking about copper peptides in the cosmetic industry in recent years and their anti-aging benefits. Many of the leading cosmetics companies advertise them promoting the promises of wrinkle-free, anti-inflammatory, and a more even smoother complexion. But what are copper peptides actually and does it work? And is cosmetics the only field of application?

For many students who have sat in an organic class, the teacher is likely to have explained that if you did not know an answer, the probability would be right if you simply answered “protein”! And right, in the end, you would usually get water, carbon, and protein. Today we will try to explain it in a way that is generally understandable. What good is chic “science slang” as a blogger if 70% of the readers don’t understand?

The ordinary copper peptides are what we are looking at. You can hardly avoid the name in the more demanding skincare business today. These are nothing more than, roughly speaking, proteins. More precisely, peptides are amino acids that are linked by peptide bonds, hence the name peptides. They have innumerable functions in nature, many of which have not yet been decrypted. For example, peptides work is hormonal and can function as catalysts, or simply stimulate cell division.

A large number of peptides chained together (polypeptides), more than 100, are called proteins. In order to determine this more precisely, however, further factors must be taken into account, for example, how the protein is folded. This also shows you how complicated the actual topic is, and that would go beyond the scope of a blog. But you can break it down a bit.

Peptides can have an effect, but they also have enemies! Especially in face care, the topic of peptides is still very controversial. This is because the flowery statements of the manufacturers have not yet been able to be substantiated with sufficiently detailed, valid study results. However, promising results are already being observed in medicine and also in sports!

The Disadvantages of Peptides

Peptides also have antagonists in our organism, the best known is enzymes. Sometimes they have nothing better to do than to render the foreign amino acid compounds harmless, i.e. to inactivate them. Strangely, this enzyme activity is more pronounced in some people than in others, which may also lead to a different quality of action of the peptides in humans (and also on the skin). You can understand that if you imagine for example the immune system also differs from person to person, works differently and the quality of the “immune system” can also be quite different.

What peptides can do

So far research has found that peptides have an effect, and one can also assign different tasks to specific peptides, such as Collagen build-up, anti-inflammatory, muscle gain, and fat loss. But it is by no means the case that exactly one peptide is responsible for exactly one function. There are, interactions, also with completely different substances and overlapping functions, etc.  A function that has already been researched quite well can be seen in the cyclic peptide Oxytocin. The hormone ensures that we “get closer”. It regulates our social behavior positively in the brain and binds us, for example, to our partner (which, by the way, has a positive effect on our health). Sometimes they don’t work, sometimes they do!

If you use a facial care product with peptides such as creams, gels, and serums, you are actually still in the new stage. You hope for a specific effect, but what you get is a little uncertain. And if you are very unlucky, you are one of the so-called non-responders or low-responders, in which peptides are apparently largely deactivated, or the body only shows a very poor effect. This is apparently the case more often with skincare products than in the medical sector. In this context, one must also point out differences in quality that can also influence the effect.

However, if you get along with peptides you will experience something wonderful because the substance can do something. Various reports from users have noticed it first with the NIOD copper peptide product, then also in other products with peptides (e.g. Skinfusion of HighDroxy and the Ordinary Copper Peptides). The onset of action is unusually clear and quick to see.

Many ranks the NIOD product impressively soothed the skin, the complexion was finer and less agitated. With skin infusion, the user was able to observe an improvement in skin elasticity under the chin even after a short time, and an incipient frown line was also apparently less pronounced after a short time. The smoothness of the skin was also significantly improved for many users. But, nothing happened to some others!

What peptides can’t do!

Peptides are not a new group of drugs that can finally do things that other drugs cannot. Wrinkles will NOT go away; the skin will NOT be pulled up and tightened like a real facelift. And there will be no real overnight surprise effect either. An optical improvement in skin quality and a reduction in wrinkles are realistic. Superficial wrinkles due to dryness will, of course, be affected faster than deep expression lines, where traditionally little can be done with cosmetics.

A more balanced skin tone, less inflammation, and a clearer complexion can also be expected. However, peptides will certainly not be able to cure severe acne. To do this, you must see a doctor who has other options.

This also applies to skin diseases as a whole. Just because the peptides are sometimes said to be true miracles and they actually have potential, they (so far) do not replace medication! Just because symptoms have been alleviated superficially by a product does not mean that the underlying disease does not persist. Any health issues you MUST have it diagnosed by the doctor.

Peptides may have some really positive effects on appearance and functionality in Anti-Aging cosmetics, but they are still in the research stages. If you are a specialist in the research chemical and want to purchase quality peptides including copper peptides, or proteins and amino acids check out USA Peptides now.