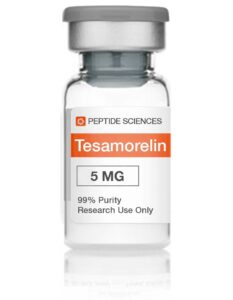 This guide takes a look at the research chemical Tesamorelin benefits as well as discovering how it works and what it can treat in the future in medicine! Tesamorelin peptide is a synthetic form of growth hormone-releasing hormone or GHRH. It contains all 44 human amino acids GHRH with the addition of a group of trans-3-hexenoic acid (N-terminally modified compounds based on GHRH). This modified synthetic research chemical is a stronger version and more stable than the natural endogenous peptide growth hormone-releasing hormone. Tesamorelin is also more resistant to cleavage than dipeptidyl aminopeptidase than human GHRH.

Tesamorelin Before and After – How it Works

Growth hormone production is associated with the regulation of many important processes and functions in the body, especially the regulation of anabolic and lipolytic mechanisms. However, it has been found that the main mechanisms by which Tesamorelin reduces body fat mass are lipolysis, followed by a reduction in triglyceride levels. Lipolysis is the process by which fats are broken down in the body, the metabolic pathway by which lipid triglycerides are hydrolyzed to glycerol and three fatty acids.

Tesamorelin is used to treat HIV-related lipodystrophy, to reduce excess fat in the stomach that is caused by taking HIV medicines. HIV-related lipodystrophy is a condition that occurs in HIV-infected patients treated with antiretroviral drugs. Clinical studies have confirmed that Tesamorelin drastically reduces abdominal fat with fewer side effects than HGH. But abdominal fat may return depending on the individual person after discontinuing of Tesamorelin dosage. Tesamorelin could cause damage to the fetus or birth defects, so it should not be used in pregnant women.

Clinical use for the treatment of excess abdominal fat is 2 mg Tesamorelin by subcutaneous injection once daily in the abdomen. Tesamorelin is classed as a research chemical and is still in the early stages of clinical trials. Whilst Tesamorelin benefits are beginning to surface there is still a long way to go before it is in mainstream medicine.