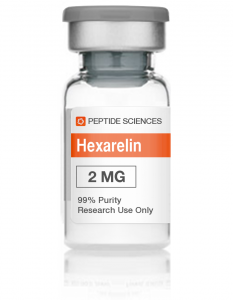 Hexarelin results are as follows:  Classed as a research peptide Hexarelin (also known as examorelin) is a potent growth hormone secretagogue (GHS). It is ghrelin mimetic and an agonist of the hormone Growth hormone secretagogues receptors (GHSR). This hexapeptide derived from GHRP-6.  Hexarelin belongs to the growth hormone-releasing peptides or GHRPs family. A group of small synthetic peptides that stimulate the secretion of growth hormone by the pituitary gland, like other Ghrelin specific mimetics, act (Ghrelin) receptor – GHSR, independent of GHRHR (Growth-hormone releasing hormone receptor).

Hexarelin in research significantly and dose-dependently increased plasma levels of growth hormone (GH) in both animals and humans. Hexarelin does not affect plasma levels of glucose, luteinizing hormone (LH), follicle-stimulating hormone (FSH), or thyroid-stimulating hormone (TSH), but like GHRP-2 and GHRP-6 peptides, it gently and dose-dependently stimulates the release of the proton (ACTH) and cortisol in humans. In addition, it also has cardioprotective activity in common cardiovascular diseases such as cardiac fibrosis, ischemic heart disease, heart dysfunction, and atherosclerosis

The History of Hexarelin

Hexarelin was developed by Mediolanum Pharmacheuti. It reached Phase II clinical trials for the treatment of growth hormone deficiency (DHD) and congestive heart failure, but did not complete development and was never marketed. The therapeutic potential of Hexarelin requires further investigation. It is classed as a research chemical and so far shows many positive results. It is not for human consumption.

It has a cardioprotective activity and helps with cardiovascular diseases such as heart fibrosis, ischemic heart disease, heart dysfunction, or atherosclerosis.

In studies Hexarelin results with a daily dosage that can promote the growth of muscle mass and strength, and when combined with anabolic androgenic steroids. The interactions in this direction are synergistically improved. In research and clinical trials, the optimal dose of Hexarelin is often reported as 1 mcg per 1 kg body weight 3 times daily.