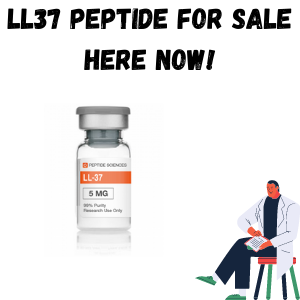 You can find LL37 Peptide for sale for research use and development now here!

But first here is the story of the LL37 peptide. It is an interesting product and discovered in 1992. Zannetti discovered a group of antimicrobial peptides different from those previously described in cattle and pigs. He named them cathelicidins. These are currently known as PR-39 in pigs and LL-37 in humans. These cathelicidins are multifunctional and have clear importance for the immune response of the host.

In the case of pigs, PR-39 is a peptide that has 39 amino acids, of which 49% is proline, 24% is arginine and only 5% is made up of other types of amino acids. Its microbicidal activity is through blocking the synthesis of DNA and bacterial proteins. It has been shown that PR-39 can cross the cell membrane without causing apparent damage. This subsequently directs its microbicidal activity affecting DNA and protein synthesis. It has also been observed that the presence of PR-39 notably favors healing. Currently, several pharmaceutical companies are investigating this cathelicidin for therapeutic purposes.  For those in research and searching for  LL37 peptide for sale<< LL-37 Buy HERE Now!

What is LL37 Peptide?

LL-37 originates from a precursor, an 18 kD molecule called hCAP-18, which exists constitutively in the granules of neutrophils. It is secreted by epithelial cells, monocytes, T lymphocytes, and mast cells when these cells are found in the presence of molecules associated with pathogens. In addition, it has been seen that cathelicidins have a very high antimicrobial effect. This is like defensins, these types of peptides act on the membrane of pathogens, forming pores that lead to lysis of the microorganism. This can also act directly on DNA, by joining the phosphate groups of DNA by electrostatic bonding and then inserting itself into the nucleotide chain of DNA. It has been observed that insertion to the DNA chain is stronger at the binding of the nucleotides adenine-thymine and cytosine-guanine and thus inhibits DNA replication. Chemotaxis is another known activity of LL-37, mainly on neutrophils and CD4 + lymphocytes.

Where Does LL37 Peptide Come From?

LL-37 has been found in amniotic fluid and semen. Some researchers speculate that its presence in semen, in addition to having antimicrobial action, is also involved in human reproduction. But to date, nothing is known about it. LL-37 peptide has also been observed to decrease levels of TNFa after its concentration has been very high due to the action of LPS, which could be used in the treatment of septic shock.

Peptide LL-37 is unique in humans and is found in low concentrations, so it is necessary to produce it synthetically for study. Due to its linear structure, it is relatively easy to produce in the laboratory; however, due to this type of structure, it is also an easy target for proteases, both bacterial and eukaryotic. The clinical importance of LL-37 is evident, especially its synergism with b -defensins. With regard to histatins, there is little research, and the vast majority focus on their structure.

The therapeutic potential of defensins in infectious diseases is very broad. Loss of defensin production capacity in the affected skin has been demonstrated in patients with severe burns. This means that recurrent infections are common in these patients and sometimes become fatal complications. It has been observed that the application of topical defensins in these patients reduces recurrent infections by up to 90%. In addition to that, the application of antimicrobial peptides induces better healing due to the fact that some antimicrobial peptides such as b -defensins.

But above all LL-37, stimulate the proliferation of epithelial cells in addition to their antimicrobial effect. This has been demonstrated by Nizet et al., Who created a CRAMP knockout mouse which is a human homolog to LL-37. These mice were skin-infected with Group A Streptococcus, and the results were compelling. Mice that did not produce CRAMP showed necrotic skin infection and a high bacterial load, in contrast to normal mice, which did not show any injury from infection and colony-forming units were scarce.

Up to Date Study with Peptide LL37

Recent studies by Uehara 48 have shown that Helicobacter pylori are capable of inducing the expression of mRNA for b -defensin-2, in addition to that said bacterium, is totally susceptible to the action of these antimicrobial peptides. Likewise, these authors demonstrate that enterobacteria that contain the cag pathogenicity island can induce the expression of this type of defensins through NF- kB.

In recent years, hypotheses have been formulated that there is a cellular antiviral factor called CAF that is thought to make some individuals resistant to HIV infection. This has led to research for the application of defensins in patients with viral infections such as HIV, which is in the experimental phase. However, it is thought that it could be an important therapeutic alternative in the future. On the other hand, in vitroSome antimicrobial peptides such as retrocyclines, which are defensins, have been reported to bind to the gp120, CD4, CXCR4, and CCR5 proteins to block the entry of the HIV-1 virus into the cell. Likewise, it is known that these retrociclinas and to -defensins have a direct antimicrobial effect on the virus. Therefore these defensins work by blocking the entry of the virus and eliminating it. However, it is still necessary to clarify whether this is also in vivo, and if so, what elements allow the infection to take place, since it could be that some individuals resistant to the infection have all this well-assembled antiretroviral mechanism, unlike the most susceptible.

The broad spectrum and low incidence of bacterial resistance of b -defensins and cathelicidin make them important candidates for research and development of new antimicrobial agents. Their low toxicity, as well as the possibility of a topical or systemic administration, give them an advantage over other antibiotics.

The authors have found (unpublished data) that defensins play an important role in innate immunity against Mycobacterium tuberculosis (Mtb). The results show that Mtb induces the expression and secretion of defensins in the lung epithelium, associating these with the mycobacterium, which causes their lysis. Furthermore, the authors have observed that defensins in the lungs decrease MTb lesions, suggesting that these peptides play a very important role in immunity in tuberculosis. Other researchers have found that defensins have an antimicrobial effect on MTb in vitro. 9.15.17.33

Until now, very little has been explored about the role of antimicrobial peptides in the immune response of infectious diseases; However, studies carried out by the authors and other groups worldwide show that antimicrobial peptides could play a very important role in the innate immune response of many infectious diseases. Furthermore, thanks to their chemotactic effect, they are a bridge between innate immunity and adaptive immunity.

The therapeutic use of antimicrobial peptides is promising, since despite having been produced for thousands of years within the innate immunity of living beings. There is a high index of strains resistant to the antimicrobial action of these peptides. This may lead to the exploration of new therapeutic alternatives, especially in those microorganisms that are multi-drug-resistant and that today produce infections that are difficult to treat. It is even possible that the use of traditional antibiotics accompanied by an antimicrobial peptide causes therapeutic synergy, which will greatly benefit the efficiency and speed of treatment.

Summary of Research So Far…

From the epidemiological point of view, the study of the genetic regulation of these antimicrobial peptides would help us to identify those individuals who are susceptible to an infectious disease. Since it is suspected that there is some susceptibility to some diseases among individuals, due to genetic polymorphisms in certain genes that code for this type of peptides. This could indicate in the future which populations may be more susceptible to certain types of diseases, based on the detection of these genetic polymorphisms. It is also possible that due to its immunomodulatory properties, its use as an adjuvant in vaccination could induce a better cellular and humoral immune response.

For research and development, you can find <<LL37 Peptide For Sale Here>>