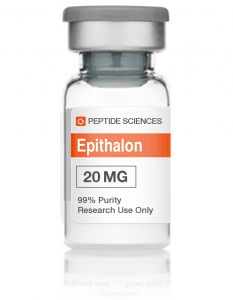 The main Epitalon peptide benefits discovered so far in research is to slow down aging and help to rejuvenate the body. These results have been found from years of studies around the world by scientists and doctors specializing in anti-aging. The research peptide Epitalon or Epithalon is a tetrapeptide and was discovered by scientists at the St. Petersburg Institute of Bioregulation and Gerontology. The man-made research peptide Epithalon was discovered as the reputed active element of a bovine pineal gland extract known as epithalamine. This reactivates the production of cellular telomerase, thus slowing down aging and rejuvenating the body.

Of all the biopeptides, epithalamine is the most studied. It is secreted by the pineal gland, which is also responsible for the production of melatonin. Epitalone is precisely synthesized epitalamine. A study conducted by Russian experts proved that in rats, epithalamine increased life expectancy by 25%.

A clinical study of senile and adult individuals conducted by Russian experts which lasted 15 years, showed that mortality decreased by almost 50% after taking biopeptides, with physiological functions generally improving. Biopeptides are formed when a peptide binds several amino acids. These peptides are bio-regulators and stimulate brain activity and cell division, and are even able to reduce tumors.

Telomerase is a telomere-activating enzyme discovered in 1999. It works by restoring the ends of telomeres after each cell division to their original length, thus stopping the biological clock embedded in the human body. As the years go by, less and less telomerase is produced in the body. However,  is able to reactivate its production in cells.

In the nucleus of each cell is double-stranded DNA. Each time the cell divides, the chromosomes shorten. Telomeres are located at the end of DNA strands and prevent the loss of genetic information that would normally occur when chromosomes shorten. But with each cell division, the telomeres become shorter. Many age-related diseases occur as a result of this constant shortening of telomeres. In theory, if telomere production is stimulated, cells will be able to constantly renew and divide, drastically slowing down the aging process.

This is where the power and potential of Epitalon lies. Administration of this peptide (for 12 years) has been shown to prolong telomeres in test subjects; as a result, their life expectancy increased by 30-50% compared to those not taking Epitalon. And the benefit is not only longer life but also better health, as renewed cells are a guarantee for a stronger immune system.

Epitalon peptide benefits including improving longevity seem amazing. For those searching for more information about high-quality research peptides see this link: These research chemicals are there for those in the science and research industry. A lot of work is still needed to be done to bring these and other research chemicals to mainstream medicine.